Dine Out and Support BORP at Gio’s Pizza & Bocce 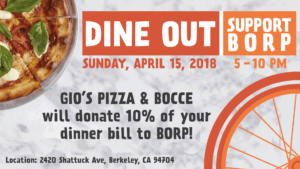 Have a pizza, play bocce ball, and support BORP all at the same time on Sunday, April, 15 between 5 and 10 PM. Gio’s Pizza and Bocce in Berkeley will be donating a portion of their proceeds from dine-in and carry-out orders to BORP!

Gio’s Pizza and Bocce has items such as salads, pizzas, calzones, pastas and tasty appetizers, and plenty of variety to accommodate just about anyone’s dietary restrictions. Their menu varies often with seasonal and local produce especially. The restaurant is kid-friendly, with a bocce court, but also adult friendly with a full bar that has an emphasis on beautiful cocktails.

BORP in the News: BORP among recipients of Share the Spirit awards

Help BORP Amplify the Voices of People with Disabilities in Sports!

An Update from the BORP Youth Program