“This team has practiced and played hard all season and have come
together to show incredible teamwork and dedication.
They are ready and excited for Nationals.”
– Coach Trooper Johnson 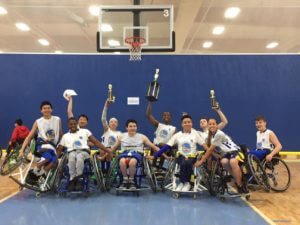 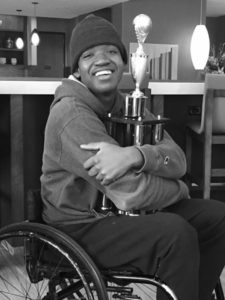 One of my favorite photos from the trip. The new kid on the block. Stephen never knew there would be sports opportunities for him because of his disability and had no idea there were organizations like the Bay Area Outreach & Recreation Program (BORP) that provide these opportunities for kids like him. After his team, the Jr. Road Warriors won the West Coast Conference Championship Tournament in Denver this past weekend you could see how much it meant every time he grabbed the trophy. His face just lit up and he just kept hugging it. It was just one small step in the team’s journey, but a huge leap in his life.
-Coach Trooper Johnson

The BORP Jr. Road Warriors came into the tournament as the #5 seed and soundly won all four of their games over the weekend, defeating Utah for the title. The tournament was held outside Denver, CO at the Gold Crowne Fieldhouse.

Just last month the BORP Jr. Road Warriors competed in a regional tournament held in San Diego at the Balboa Park Municipal Gymnasium, winning 5 of their 5 games. In all of their San Diego games the team scored 50+ points and defeated their opponents by 20+ points. (Click here to read more about this tournament.)