Based in the precision of Iyengar yoga, this class explores the benefit of bringing awareness to the relationship of our body. Inviting the breath to guide movement, we will look at the bones’ ability to support us. Releasing effort where it doesn’t serve us, we can awaken the intelligence of our inner body.

Vinyasa offers an opportunity to fully weave together body and mind.  Harnessing the breath as our guide, we will enter movement with the presence and inquiry.  As a dynamic class, we will gain strength and flexibility. At the same time, the balance of physical, mental and intuitive intent awakens a sense of play and humor.

Give yourself the blessing of restoring your body to its natural state.  Relaxing and healing, this practice is designed to restore the nervous system and help release deeply held tensions from the body and mind.  When supported with props, the body is available to open blocks usually submerged below the horizon of consciousness.

Raised in Petaluma among oak trees, Erik trained in ballet and modern dance for ten years while growing up. Always entranced by the arts of the body, he began studying yoga and tai chi in high school.

While studying at Cal, he began meditating regularly thanks to a class with local yogis Christopher Tompkins and Chris Wallace. This delight led him to study at zen centers after college, practicing for four years at Green Gulch and Tassajara monasteries. He continues to study with his teacher, Reb Anderson. Throughout his twenties, yoga remained an integral aspect of his week, and he explored many styles while living in Seattle and New York. 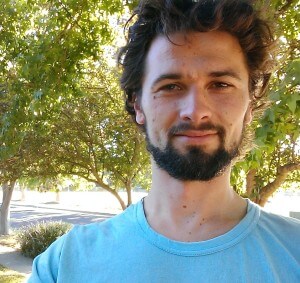 Joining a number of workshops that married yoga with zen, Erik grew more enthusiastic about asana as an awakening practice. He decided to commit to Piedmont Yoga’s 300 hour teacher training program, rooted in Iyengar and focused on the eight-fold noble path. Through his mentor Richard Rosen, along with guides Baxter Bell, Mary Paffard and Rodney Yee, Erik developed deep respect for the transformative power of yoga in our world.

Beyond a beautiful way to come together with intention and peace, Erik believes in yoga as an inviting ceremony of joy.