Capoeira Is For Everyone 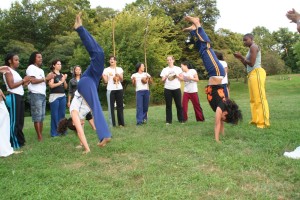 Incredible! How do they jump around, flip, and move like that?  I could never do that. Is there a place in this art form for me? These were my thoughts the first time I experienced capoeira at a performance at my university’s cafeteria stage. What stood out the most was how much capoeira, as a martial art, was different than the kung fu movies playing out in my head with fighters moving in a linear, meticulous fashion. There was music, everyone was singing, and each person kept moving in a circle. It was definitely not a static art form.  All I could think of was how great it would be if there was a place for me in it.

Later on, I learned that capoeira is a Brazilian martial art created by African slaves in Brazil as a part of the African diaspora. There are many myths of how and why capoeira took shape; one being that slaves purposely disguised fighting movements as a dance to hide from their masters that they were actually combat training. The most accepted belief is that capoeira was created by the combination of African and Native American traditions as a way to preserve cultural heritage. In the 1800s capoeira was outlawed in Brazil and was forced to live in the streets. In the 1930s, through much effort by Mestre Bimba, capoeira was accepted as a national cultural art form and taken off the streets to be placed in academies to become what it is today.

When I admired this art form I sighed in disappointment thinking about the metal rods in my spine which impacted my flexibility and range of motion. I had surgery when I was 17 that placed Herrington rods on either side of my spine to combat scoliosis. Knowing this I put myself in a box. I decided what was or was not for me without even giving any glimmer of hope a chance. But capoeira kept following me wherever I went. I had friends who started to train, I met someone at a club who taught it, I worked across the street from a capoeira studio, and finally it was offered as a gym class while I was in graduate school. In the end I allowed capoeira’s allure to draw me to my first class where I told the instructor that I was just “trying” it. I did not think I could do it. 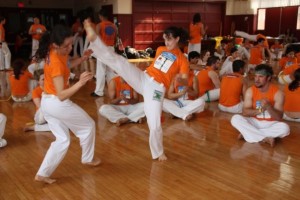 Throughout it’s history, capoeira has been and continues to be a fight for freedom. The very nature of the art form took hold of my “trying” mentality and encouraged me to reach beyond what I thought was possible to break out of the box I had placed myself in.  Movements that I thought were not possible for someone in my condition became possible. I can do a headstand, get up into a handstand, even spin a little in a handstand, I can go into the air, and even go backwards a little. My body does have its limits, but capoeira surprised me with another one of it’s beautiful secrets: it’s adaptability. The movements taught in capoeira are all adaptable. Mestres, capoeira masters, commonly tell everyone to find how the movement fits into your body because everyone’s body will move a little differently. When two players go inside the roda, circle, to make a game, we don’t call it sparring, it is all improvisation. This means every player of capoeira uses whatever movements their body can do to connect with their partner.

Capoeira has helped me gain freedom from the box of doubt I had put myself in. Capoeira’s adaptability is why I believe that capoeira is for everybody. This is why I teach it and want to share it with everyone.  What I have discovered through the years in training capoeira goes against what I originally believed.  I want the lessons I learned through this journey to change the message that comes to mind when one sees capoeira: “Yes there is a place in this art form for you.” 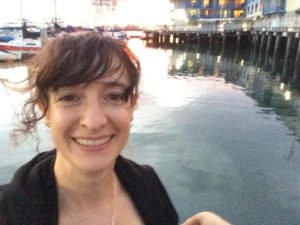 Lorin will also be teaching a free informational workshop on Capoeira on Saturday, June 13th from 2-4pm at the BORP studio.