Hilary Goldman and Manning Sutton, self-described simple, down-to-earth people who like living in Berkeley and riding bikes, have been BORP supporters since 2005. They remember the moment they learned about BORP precisely.  “It was Martin Snapp,” Hilary says. “In 2005 all of BORP’s bikes were stolen from the cycling center and he wrote an article about it. We read it and were moved and disturbed by the story and we wanted to help.”

When they called the BORP office later that day, they spoke with Rick Spittler, Executive Director at the time. Rick told them what it would cost to replace a bike. “And so we bought a bike.” says Hilary before chuckling, “Then he said, ‘oh, by the way, have you heard about our annual fundraising ride, The Revolution?’”

They signed up to ride and raise funds the following September. Hilary describes a moment she had at one of her first REVs, “I was riding along with a guy and we were just talking and feeling the rush of air on our faces and looking around. And I was pedaling with my feet and he was pedaling with hands, but it didn’t matter. We were cycling together.” 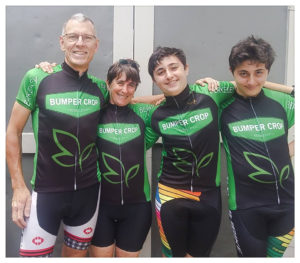 Manning and Hilary with their kids, Parker and Addison, at the 2016 Revolution. (Photo courtesy of Hilary Goldman) 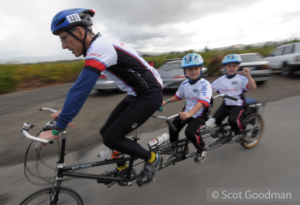 Manning and the twins riding a three-seater bike at the 2008 Revolution. (Photo courtesy of Scot Goodman)

Ten years later, they’re still riding in the REV. “We’ve only missed a couple years. One when we lived abroad and once we had a conflict.” Their kids, Parker and Addison, ride too. One year the twins rode a three-seater bike with Manning. And more recently, their kids’ friends have started joining them for the ride.

When they first started riding and fundraising for the REV, both Manning and Hilary worked for companies that provided matching donations and they drummed up support at their workplaces to double their impact. Today, they match the funds donated to their team, the Berkeley Bumper Crop, each year.

“We want to give to a local organization” Manning explains. “When we give money, we know what BORP is doing with it. We can see it and we know that it has an impact the moment we give,” says Hilary. “I’ve seen parents in awe of the changes in their child. It lifts their spirits. They are so happy to see their kids being active and part of a team and included.”

“I wish more people knew that right here in their community there is this diamond that does all these things to make the community better. It’s a small organization, but it has a big impact.” Manning says. “If they knew about about [BORP], I think people would be really proud.” 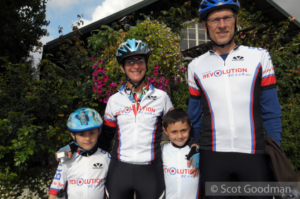 Hilary and Manning with Parker and Addison at the 2008 Revolution. (Photo courtesy of Scot Goodman)

Click here for more information about the 2017 Revolution Ride & Festival, to register to ride, or to make a donation.