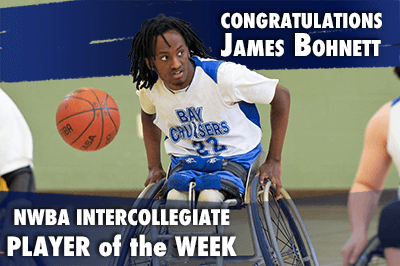 Former BORP Varsity Basketball player, James Bohnett, was named NWBA Intercollegiate Player of the Week for October 31-November 6. James, who attends the University of Missouri, scored 82 points, and had 19 rebounds and 16 assists over the course of three games during the University’s Mizzou Classic tournament, leading his team to the tournament title.

Reflecting on James’ early career as a young BORP athlete, Coach Trooper Johnson said, “James was such an incredible athlete during his time here at BORP.  He was a true leader on the court and made all of his teammates better.  His passion for the game was incredible and he seemed to always have a smile on his face.  During his senior year, James scored 80-90% of the team’s points and never failed to give his teammates credit for the work they were doing to make it possible for him to score. Congratulations James!”

Click here to read more about James and learn how the NWBA selects a Player of the Week.