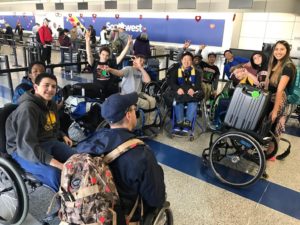 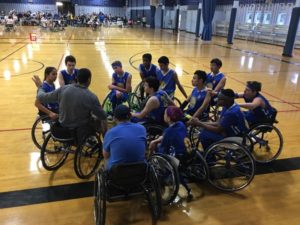 What an amazing weekend of youth basketball in Berkeley.

The 2014 NWBA Northern California Regional Junior Wheelchair Basketball Tournament was played this past weekend and it was incredible!   The event kicked off on Friday evening with a dinner/dance party for the teams competing in the tournament.

Saturday’s games began with a bang and it was obvious that the teams coming to town had prepared for this weekend.

This was the first time BORP would be playing as the Jr. Road Warriors thanks to a brand new partnership with the Golden State Warriors. 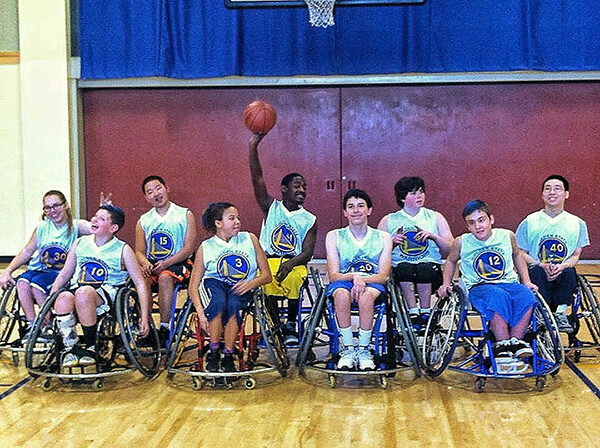 BORP’s first game was against the Portland Wheel Blazers, and their star player, Josh Brewer, quite possibly the most physically talented youth wheelchair basketball player in the country: 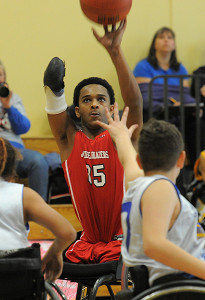 The gym at Longfellow Middle School was packed with the loudest crowd ever seen or heard at a BORP Youth game, and when the Jr. Road Warriors scored their first bucket the place went nuts.  Unfortunately, BORP’s offense stalled and the team fell 36-20.

Next up was a game against the Rancho Renegades, from Los Angeles.  BORP had beaten Rancho during a tournament in Phoenix last month, and both squads anticipated another close game.  The Renegades came out determined to avenge their loss and seemingly could not miss while BORP simply could not get on track.  It was one of those games best forgotten for the Jr. Road Warriors.

Fortunately for the BORP kids, the weekend was not over and the team had time to regroup for Sunday.

Donning their new white and blue Jr. Road Warrior jerseys, the kids showed up on Sunday with an amazing attitude, and in a show of team unity, had sprayed their hair with blue highlights. 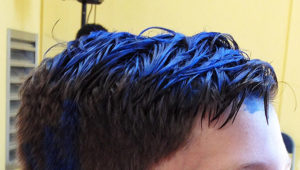 Some of the famous blue hair

It seemed to work.  So well in fact, coach Trooper Johnson is now considering buying a case of blue hair spray for the rest of the season.

The first game on Sunday for the home squad was against Seattle and was one of the best of the tournament.  Seeking to redeem themselves from their poor showing the day before, the Jr. Road Warriors pressed Seattle and forced turnovers from the start.  BORP took a lead and held it for most of the first half.  They dictated the pace of the game and worked together with an incredible team effort.   Cortney and Christie were able to pick and seal for their teammates and play incredible defense.   Koda was forcing the action all over the court and led the team with 24 points.  William played fantastic defense and added 5 assists, and Andre added 10 points and 4 assists in the effort.

Down by 3 with just over a minute to play, Jr. Road Warrior Amit Vigoda was fouled and went to the line.  In his earlier free-throw attempts, 11-year old Amit had failed to reach the basket, but when his team needed it most he was able to drain the first of two shots to bring the deficit down to two points.  BORP’s defense got a stop and was able to get possession of the ball still down by two with 14 seconds left.  The crowd was going crazy as Coach Johnson’s play design worked beautifully on the inbound.  Unfortunately the final shot would not drop and the game ended with Seattle on top 40-38.

Even though the team lost, it was a game to be proud of.  The effort and intensity that they showed was exactly what the coaches want to see from them, and they finally showed the crowd what they were capable of.

BORP finished the weekend with a matchup against Spokane.  Most of the kids on the two teams have known each other for years and this has become a playground-type rivalry.

Coach Johnson switched things up a bit and started Matthew and Daniel.  The teams battled back and forth throughout the game, but the Jr. Road Warriors were able to continue to build a lead throughout the first half.  During the second half, Spokane put on a run and cut the lead down to six points.  BORP stretched it back to 10 points and went on to beat a tough team that simply never quits.

Koda led the Jr. Road Warriors with 16 points.  William was everywhere and added 14 points and 4 assists, and Amit added the final four points and Andre contributed four assists to the effort.

This was another incredible TEAM win.  Everyone contributed.  Christie, Cortney, Griffen, Daniel, and Matthew all came in and did their jobs incredibly well.  Even when Griffen got a foul called on him late in the game, it was because he was hustling to make a pick for his teammate.  Daniel’s speed is deceptive and catches everyone off guard.  Throughout the weekend there were several times where he had double picks on the same possession.  Matthew continues to work great with Koda to get him his shots, and Andre and William continue to get better and play with more confidence, and Amit is growing up on the court right in front of our eyes. 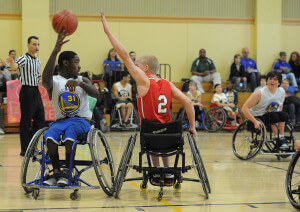 Andre looks to pass to Koda

BORP parents continue to raise the bar at every event, and this weekend was no exception.  Thanks to all the parents and families for making this weekend such a success.

This entire event would not have happened if not for the efforts of the families involved.  Na’ama (Christie’s mom) and her army of BORP parents and volunteers including: Kelly (Cortney’s mom), David & Jenny (William’s parents), David H. (Matthew’s dad), Sylvia (Daniel’s mom), Aric (Koda’s dad) – YOU ARE INCREDIBLE!!  It is amazing how willing you all are to do for others.  Throughout the weekend they served hundreds of meals, kept a hospitality room supplied for athletes, staff, support people, and referees, kept score, ran the clocks, ran water for teams, made trips to the stores and gave up watching the 49ers game for the tournament.

Nancy & John – Thank you for providing food on Friday and for your continued support for our programs.

Steve Harwood, Bill Cosden and crew – THANK YOU!!  You brought each game to life and added so much to the tournament.

The Golden State Warriors – Thank you!

And, of course, thanks to Scot Goodman for the great photos!

Thanks to all the families that came to the games, all the folks that made posters, and everyone else that had a hand in making the tournament such a success.