By Betsy Dorsett on December 8, 2016 No Comments 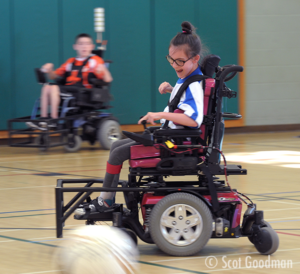 You can help kids like April find their community by donating to the BORP Revolution Ride today. The Revolution is BORP’s largest annual fundraiser — all gifts, no matter the size, will have a direct impact on the lives of people with physical disabilities in the Bay Area.

BORP’s youngest Power Soccer player, April Cookston, was recently featured in an article appearing in the East Bay Times. April joined the Bombers after moving to Oakland with her family. But when April showed up to the gym to watch power soccer for the first time, what she really found was a family.

“April Cookston remembers the days she sat watching in her wheelchair as her brothers played soccer, longing to scamper in the grass with them. But she was confined to the sidelines.

Those days are over. April, a 10-year-old with cerebral palsy, has found a team of her own: the Bombers, a power soccer team in the Bay Area Outreach and Recreation Program, BORP.”

It’s hard to imagine BORP Power Soccer without April on the team. April is developing skills and gaining confidence that she will carry with her throughout her life. And her power soccer team has become like a family to April.

This article appeared in the East Bay Times as part of the Share the Spirit Campaign, sponsored by Bay Area News Group. We would like to thank the Bay Area News Group for their support of BORP’s adaptive sports and recreation programs and for sharing this story with their readers.